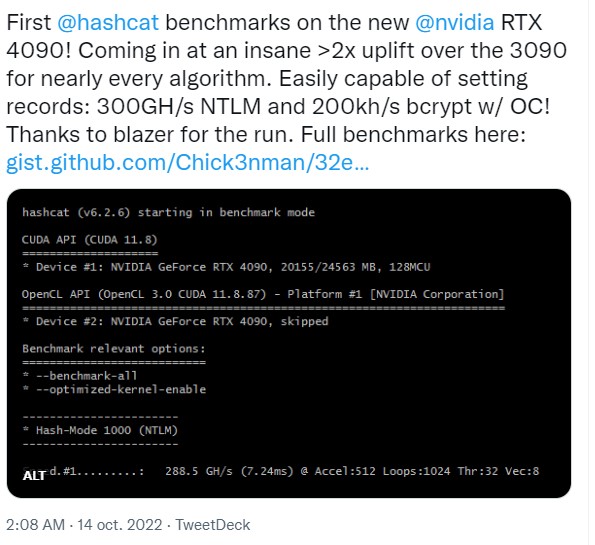 Based on the test results, a fully-equipped password hashing machine with eight RTX 4090s (or $20,000 at today’s price of this writing) would have the computing power to perform 200 billion passwords. iterations of an eight-character password in 48 minutes.

CNIL recommendations on passwords: a solution to cyberattacks?

Faced with the multiplication of data leaks and cyberattacks, the CNIL published on October 17, 2022 a directive on the security of passwords for the attention of companies. The fraudulent introduction into information systems most often finds its origin in the accessibility of passwords, the robustness of which constitutes a major cyber-security issue.

The ZATAZ Monitoring Service has seen no less than 22 billion (yes, yes) login credentials since its inception.

If the recommendations of the CNIL are not mandatory, hacked companies can now be criticized for not having implemented within them a demanding protocol on the composition of the password.

Companies are therefore strongly encouraged to review their protocol in the light of this deliberation and to modify their IT charters in order to raise their security threshold.

Already on December 28, 2021, the CNIL had sanctioned a French telecom operator to the tune of 300,000 euros on the grounds that the transmission to its customers of a password which is neither temporary nor for single use and whose renewal is n is not imposed, makes it easily and immediately usable by a third party who would have access to the message which contains it, which induces a certain number of risks for the protection of personal data and for the privacy of individuals.

The organization using password authentication must define a password management policy, of which the persons concerned are informed, as well as a regular review of its implementation.

The CNIL identifies three cases of authentication by password associated with different levels of entropy, that is to say a degree of chance in the composition of the password to be respected.

*Minimum of 8 characters including 3 of the 4 character categories (uppercase, lowercase, number, special character)

Note that the CNIL no longer recommends using additional information (such as the name of the parents, the pet, etc.) to secure a password. Obvious, but it always gets better by writing it (which Zataz has been doing for 25 years!)

The password must never be stored in clear (it must first be transformed using a non-reversible and secure cryptographic function). It is recommended to no longer require users to change their passwords periodically, but only for administrative accounts.

What to do in the event of a password security breach?


Check out our social media profiles as well as other related pageshttps://metfabtech.com/related-pages/